I said I’d give a review of the film last night, if it was worth it – well believe me it was!  Don’t be put off watching “Catch me if you can” because Leonardo DiCaprio is the main actor (sorry Leo my old son).

I’ll keep it brief as I’m no Barry Norman…. it’s based on a true story about a young man called ‘Frank Abagnale Jr‘ who conned millions – yes I did say millions – of dollars in cheques (or checks as they say in the US) using various guises.

Now if you find that sort of stuff gets your creative juices flowing, then I’d recommend reading his book ‘The Art of Deception: Controlling the Human Element of Security‘.

Who says the media only print what they want, when today I was pleasantly surprised to see that the ‘South Wales Evening Post’ had indeed printed a picture of DDWT Junior (and another picture of mine) in the paper. Oh shucks, I might end up a paparazzi photographer after all *wink*

Went on a family expedition today down to Mumbles and took in a dragon parade and a visit to Oystermouth Castle. Evidence of both can be seen in the pictures below (and yes I do like taking pictures with my Canon Powershot S45 digital camera!). 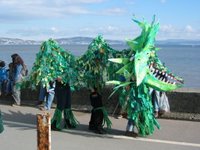 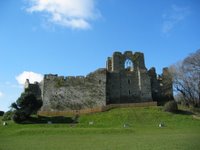 If you’re not familiar with the Gower area, then I can honestly say that is one of the most stunning areas of natural beauty in the whole of the UK and definitely worth a visit.

A useful point for the Swans today in their 2-2 draw with the Tykes of Barnsley at Oakwell. I know some people will moan that it’s yet another draw – but to rescue a point away from home with 10 men and against promotion rivals, has to be seen as a point gained rather than 2 lost (well that’s my take on it anyway!). With other results again going our way at the top of League One, all is certainly not lost in the run-in for automatic promotion. It does however make the visit of the Saddlers of Walsall next Sunday to the Liberty a must win game. I’ve got my ticket already – have you got yours?