Decided to visit Fendrod lake today for an early morning walk and for DDWT Junior to feed the ducks and swans. It really is quite a pleasant and tranquil setting considering it’s smack in the middle of the enterprise zone in Llansamlet (near Swansea for those not in the know). The number of fishermen, walkers and joggers we encountered during the hour or so stroll was testament to this. As usual, I took a few snaps for the purpose of posterity *smile* 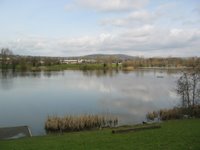 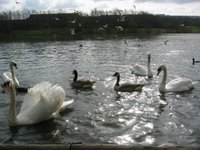 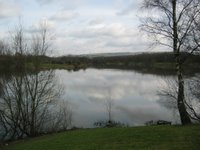 After the lovely walk, we returned home to watch the rugby (Wales v Italy) – boy do I now wish I’d stayed at the lake! After a bright opening to the game, I’m simply lost for words as to how Wales could contrive to almost give Italy their very first away win in the 6 Nations EVER. As a proud Welshman, I found today’s draw very very hard to stomach and just illustrates how much the dragon has stopped breathing fire. So in the words of Eminem (well almost), would the dinosaurs in the WRU “please stand up” and explain why in God’s name Mike Ruddock is no longer at the helm. *big sigh*

I watched ‘School of Rock‘ last night and whilst the storyline was a wee bit thin on the ground, the musical creativity and imagination shown in its delivery was very good. It wasn’t as gut bustingly funny as I thought it would be, but it had its odd moments and perhaps in all honesty the aim of the film wasn’t really meant as a comedy but as an example of how you can be what you want to be if you express yourself (especially in terms of music in this case). Anyway, if you haven’t seen it, its worth a look.