Swansea City were today crowned winners of the Football League Trophy after beating the Cumbrians of Carlisle 2-1 at the Millennium Stadium in Cardiff and I was there! The match itself was an entertaining affair – which is unusual for a cup final – although I personally felt that for a 42,000 odd crowd the atmosphere was strangely subdued for large parts of the game. Even the 28,000+ Swans fans weren’t in top voice, which is very unusual as we’re a passionate bunch on the whole. Still, we won which is the main thing and here are some snaps I took along the way.

The players getting ready for kick-off while the red carpet is being removed! 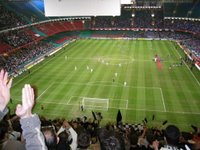 The scoreboard display with only minutes left of the game. 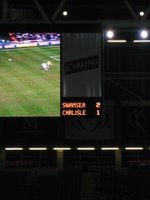 Some of the Jack Army heading out of the Millennium stadium along Wood Street. 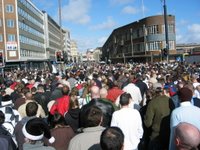 All in all a good day, but I’d still swap it all for a place in the Championship next season. Next stop are the Valiants of Port Vale, roll on Saturday!

Prior to departure from the Liberty stadium this morning (to catch the bus to Cardiff) I found some time to take my usual Sunday tale of the scale, which showed me weighing in at 17st 1lb this week – so another 1lb lost. What a beautiful day!