Having not been to Rhossili Bay (Llangennith beach in particular) for donkey’s years and given that my family has never been there, today was an ideal opportunity to change all that. But before getting to Rhossili we made a flying visit to Broughton Bay and the very quaint village of Llanmadoc. 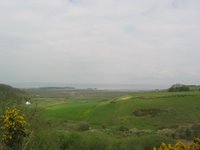 Now not being a regular to north Gower, I was struck by the natural unfound beauty of it all – probably because the majority of visitors seem to head for the more popular (better advertised?) southern area of Gower.

When we arrived at Llangennith beach and parted with our £2 parking fee for Hillend Caravan Park (no plug intended!), the family weren’t disappointed with the view that met them. Despite the overcast and somewhat breezy conditions, the beach was as I remember it – vast and glouriously sandy. The majority of people on the beach were either sand sailors (I think that’s what they’re called!) or young families – such as ours. 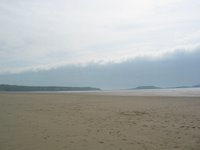 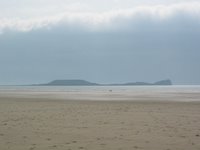 We decided to make our way home via the Mumbles and ended up getting some chips from ‘Yallops’ on Mumbles road and munching them in the car park at Bracelet Bay – with the lighthouse in full view. 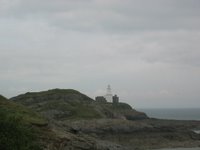 Did my usual weighing scale trick today with the end result showing 17st 1lb – so I’ve gained a 1lb on last week. Not bad considering the lack of rhedeg (that’s running in Welsh) this week.

1 thought on “Down the bay”