Picture a scenario whereby the local train operator (Arriva in this case) decide to run some special ‘football service’ trains from Swansea direct to Cardiff (with no stops) this weekend for the Play-off final between Swansea and Barnsley. Great isn’t it, especially when these are in addition to the trains that will be operating the normal Swansea to Paddington route – as per every other day. Even better I thought that I could buy a train ticket online for the latter train and get to Cardiff without any hassle.

Well it was all great until Arriva decided that you had to get a boarding pass. Now being someone who considers themselves of average intelligence, I thought “no problem, you’ll only need a boarding pass for the special football trains” – well not quite. Arriva in their wisdom have decided that EVERYONE travelling on ANY train going to/via Cardiff from Swansea on Saturday between 08:00 and 14:00 MUST have a boarding pass. To make matters worse you have to queue at the station for trains leaving in your allocated time slot. Now how dumb is that!
Here is the photographic proof the source of my frustration. 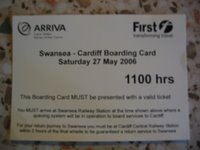 Given that I’ve been on a course today looking at ‘Performance Management‘, I find the above all the more annoying and funny in the same breath. It was quite an interesting and thought provoking first day (more on it tomorrow) and I learnt quite a bit about the ‘pulling’ and ‘pushing’ techniques of leadership and management – which are obviously performance related and driven to an extent. We also did some role play scenarios which were great fun and really illustrated some of the points made about being a good listener and being assertive.

Mrs. DDWT and DDWT Junior spent the day in not-so-sunny Aberaeron visiting family and no doubt spent some time feeding the ducks on the river aeron as is the norm during any visit – regardless of the weather!