Enjoyed a day off today and made the most of the time with DDWT Junior and the Mrs. Not even the continous rain could put a dampner on what was a good, fun day all round. In fact it was like being back in play-school with the amount of time we spent drawing, painting, making all sorts with play dough.

I finally treated myself to a new mobile phone this morning after months (yes months) of thinking about which one to get. I finally parted with £39.95 of my hard earned cash in exchange for a brand spanking new Sony Ericsson K300i which I thought was an absolute bargain price for all of the features it has. It’s a camera phone which can also record video and plays MP3’s as well and I’m chuffed to bits with it. It’s certainly far better than the bottom of the range Nokia 1100 I used to have!

After being on the receiving end of some pukka nosh from Mrs DDWT over the last week or so, I decided to resume my cooking duties today (seeing as I had the time) with a ‘ranch’ barbeque beef dish. I diced up two sirloin steaks (I know that’s criminal) and added them to some sliced potatoes, mushrooms, ringed onions, carrots, spinach, a dash of herbs and added a ranch barbeque sauce on top. 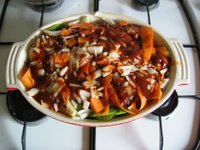 Some 1hr 45 minutes later (middle of the oven at 200 degrees) I served it up with some microwaved baby corn just to finish it off. It was very tasty and well worth the effort.

Back to work tomorrow and hopefully back to training as well – so watch this space.