I did the Gower Bike Ride today and was well pleased with my time of 1 hour 50 minutes for the 29 mile ride around the Gower. Even more pleasing was that it was some 20 odd minutes quicker than my time last year.

I met up with the duathelete (and friends) at around 8am and we set off with the hoards of other riders as soon as the ride was officially started by the Lord Mayor of Swansea – Chris Holley at around 8:20. It came as no surprise that I couldn’t keep up with the serious riders and settled for my own pace, whilst jostling with one or two other riders for ‘our little bit’ of supremacy. The conditions on the whole were good – overcast, slight breeze and towards the end some rain. It came as a relief really as the weather had promised to be a scorcher – thankfully it held off until this afternoon!

Anyway, I met up with the duathelete gang at the end of the ride and found out that they’d completed the course in just over 1 hour 35 minutes. In light of this and the fact they had road bikes as opposed to my mountain bike I was very pleased with my time. I also felt surprisingly fresh – not knackered like I was last year and even better I wasn’t sunburnt either! Here is a picture of my ride number and medal for completing the ride. 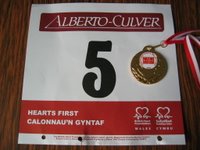 I’ve also raised £57 to date in sponsorship (online and offline) but if you’d still like to make a donation you can still do so via my online sponsorship page.

The DDWT Family spent this afternoon going for a lazy walk around Swansea and of course the shops. One thing which has always perplexed me is why women have such a fascination with shoes. I’ve spent many years (almost 30 in fact) trying to figure out this phenomenon and not even Mrs. DDWT can help me get my head around it. I mean why do you have to have 50 odd pairs of shoes (randon number chosen not the amount the Mrs has I hasten to add) most of which are the same colour and style? The usual retort when I pose this question is “becuase these will go with y pair of trousers and x colour skirt”. Maybe I should give up and just realise that Imelda Marcos is as iconic to women as say Sir Stanley Matthews was to football loving males.