I decided to take a day off from training today and give my body a break as I was feeling somewhat exhausted after the last few days exertions.

We’ve been trying to teach DDWT Junior different colours of late, as everything was considered to be “Ello”. In fairness he’s beginning to grasp the others quite quickly, but it’s funny that for every new colour he learns, everything immediately becomes either “Geen”, “Loo” or “Red”. His numeracy skills are also improving with him now being able to count up to twelve in English and up to five in Welsh – chwarae teg (that’s fair play in Welsh).

Just to get your taste buds moist with anticipation, I thought I’d mention the salmon dish that Mrs. DDWT conjured up for our evening meal tonight. 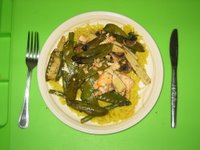 The salmon had been roasted along with some mangetout, mushrooms, asparagus, babycorn and lightly splashed with some lemon juice before being served with some yellow rice. Very tasty and ultimately healthy!

My observation of the day was whilst stuck in traffic on Oystermouth Road this morning on the way into work, where I actually saw a female Ford Ka driver putting on some mascara! I had to look twice – not because she was good looking, she wasn’t – as I couldn’t believe that she was actually doing that whilst waiting for a red light to change.