DDWT Junior attended his very first parent and toddler group sports day today and it was all the more significant as it was on the same sports field that I played schoolboy rugby on some 20 odd years ago.

He entered two races – the usual 10 yard dash and a hula hoop race. Given that he was one of the youngest there at 29 months, it came as no surprise that he finished last but one in the dash and well let’s just say he didn’t complete the hula hoop race due to wanting to play with the hoop rather than run with it! Nevertheless, he really enjoyed himself and found a new interest in hula hoops at the same time.

The realisation that the proper football (League One to those in the know) starts soon came closer today when I bought my ticket for the only home pre-season friendly at the Liberty Stadium. 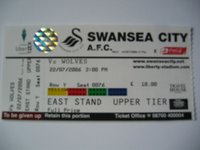 The Swans entertain the Wolves of Wolverhampton on July 22nd in preparation for their league campaign which starts on August 5th – and I’ll be honest I can’t wait for it all to begin (especially now that I’m a season ticket holder).

Talking of the Liberty Stadium, I was done there yesterday doing some work and decided to pop into the club shop (in search of some bargains). Well I came across some kids Ospreys rugby jerseys and simply couldn’t resist getting one for DDWT Junior. 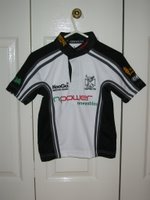 Considering that it is a sports jersey when all is said and done, I can see why the Ospreys shirts are the second biggest selling rugby jersey in the whole of the UK (behind the Leicester Tigers). It’s rather a nice looking shirt compared to some you can get and I was pleased with what I got for my £10. For the rugby purists reading this (of which there are loads I know *wink*) the jersey above is the Ospreys away shirt.