In complete contrast to my usual exercising activities, today’s exertions consisted of shovelling earth and laying part of a lawn – all in aid of the DDWT garden regeneration project (AKA making our garden child friendly). I thought that starting this job after 6pm would be an easier option given the sweltering temperatures that we are currently experiencing, how wrong I was. I still managed to perspire like a sheep stuck in the sahara.

DDWT Junior was obviously impressed by my efforts as he constantly insisted on telling me it was “gweight” – which was his new word for today. In fact I have to say he also commented that Mrs DDWT’s Chicken concoction was also “gweight” and I must confess that I have to agree with him (well I’ve got to say that haven’t I). 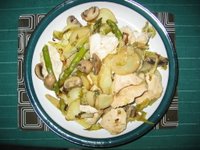 Seriously though it was rather nice and consisted of roasted chicken breast (diced) served with potatoe escalopes, asparagus, leeks, cabbage and mushrooms. As you can imagine with that amount of greens there was a bodily impact in terms of flatulence, but I won’t expand on that subject any further!

I splashed out on a book called “Not for the faint-hearted: My life fighting crime” today which is basically the autobiography of John Stevens, the Metropolitan Police Commissioner (2000-2005). It has received some very good reviews and I’m intrigued into the way he managed to turn around the Met Police from a demotivated poor performing force into one which has never been in such a good state.