No the weather hasn’t suddenly gone all artic here in Swansea, I’m referring to the band called Snow Patrol, whose album ‘Eyes Open’ I’ve been listening to non-stop over the last few days. I must confess to not having really taken much notice of them before, but the our local radio station ‘The Wave‘ have been playing their ‘You’re All I Have‘ track a lot lately and it’s just one of those tracks which keeps going round in your head! Their new single ‘Chasing Cars‘ is of the same ilk and will no doubt have the same effect.

I’m no music expert, so I couldn’t really comment on the type or brand of music they play – except to say that its catchy in a “ballady” (is that a word?) kind of way. Anyway, I think that’s enough of a plug don’t you!

Mrs. DDWT took DDWT Junior to Fendrod Lake today to feed the ducks and to relieve the monotany of being in the house watching Bob the Builder or Dora the Explorer again and again, as DDWT Junior is more than happy to do most days! Whilst there Mrs. DDWT was able to take a snap or two of the large number of swans that inhabit the lake. 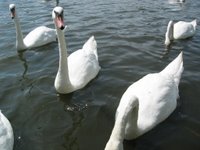 It’s near to car insurance renewal time for me at the moment and it’s at times like these I really love the internet and in particular sites like Screentrade – which is basically a insurance comparison tool, which searches out the most competitive car insurance quotes for you. The beauty is that you only have to enter your details once and it searches through loads of insurance companies. It saves sooooo much time and money!