I made another visit to the Eisteddfod today (utilising the free Swansea Vale Park and Ride facility in the process) for work and took the opportunity to have a wander around the Maes to see what it had to offer. In a word there is plenty!

It’s really great to see such a wide range of Welsh culture on offer here in Swansea and it’s even better to see so many of the non-Welsh speaking locals visiting the site and thoroughly enjoying themselves (and sampling the general hywl that reverberates around the Maes). 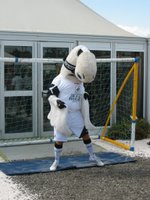 I popped along to the City and County of Swansea area of the maes as they were launching their Welsh Language Scheme today – with the help of Cyril the Swan and Owain Tudor Jones. 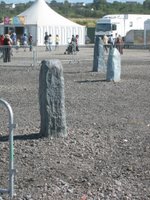 I also bumped into Derek Brockway (BBC Wales Weatherman) and Claire Summers (BBC News Wales) on the maes, as well as quite a few other faces I recognise from the world of Welsh media! 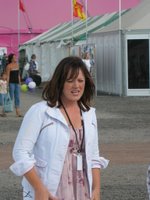 I went out for a lunchtime ride today with my duathlon friend and we knocked out a 14 mile ride around Blackpil, Mayals, Caswell and Bracelet Bay before heading back to work. It was a great ride in the sun (albeit very windy) and we were spoilt by some terrific views of the Gower and surrounding coastline (not to mention Catherine Zeta-Jones’ house in Plunch Lane as well!).

DDWT Junior has today started drinking tea, which I must confess is rather amusing. I mean how many 2 and a half year olds ask their Mams and Dads for a “Cup a tea pease” – classic.

On an altogether different note and of techy interest to myself are the various debates surrounding the use of CSS for images (especially for blog logos such as the ones opposite). I was therefore intrigued to see and see the demos of Mike Golding over on notestips.com – nice one Mike!