The Swans finally got their long awaited first victory of the season today against the Rovers of Doncaster, thanks to two Lee Trundle goals in the last 10 minutes.

Both teams huffed and puffed throughout the game without either side really threatening the goal. I can’t recall any clear cut chances for either side (other than the goals) with most shots being from outside of the box and way off target. In fact the game had nil – nil written all over it, until – with the crowd baying for Bayo (pun intended) – a double substitution which saw Bayo replacing Fallon and Williams (the boo-boys current favourite) replacing McLoed (who gets more frustrating by the week). As if by magic, the Swans were transformed and at last looked dangerous. The goals duly came – courtesy of Trundle”s left foot (he hasn’t got a right) – and the 12,000 odd crowd went home happy.

Without wanting to sound too critical, the result will paper over some of the cracks that are still there for all to see. We seem to be playing far too much route one stuff (which certainly isn’t what we’re accustomed too) and have on times a weak midfield/defence (who seem to go AWOL on occasion). My picks for today were Izzy (Iriekpen) and Dennis Lawrence (the debutant). A full match report can be read on the official Swans site.

Talking of the Swans and with my bleating about the Western Mail still fresh from yeterday’s posting – my article finally turned up in today’s paper! 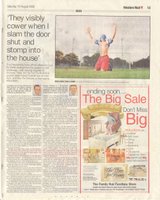 I didn’t think they’d use my article word for word but in fairness they did and I’m impressed. You can read the full article here on the Western Mail site or on one of my previous blog posts.