Being a fan of open source software, I decided to give an old laptop a new lease of life today by installing Debian GNU/Linux on it. It installed in a breeze having only downloaded the mininal bootable CD version (and burned it onto a CD of course). The rest of the install was done over the net – with me choosing the components I wanted. Nice and easy, just the way I like it and hey presto I had a networked laptop with internet access.

Now your probably wondering why on earth I’d want to do something as seemingly random as this. Well I decided on this ‘flavour’ of linux in order to try out a cool piece of software from Best Practical called ‘Request Tracker‘ – more commonly known as ‘RT’. Unfortunately this wasn’t as easy to install and the wiki-based documentation was rather out of date – so it was a little bit like trying to feel my way around in the dark.

I’ve almost completed the installation now, but decided to call it a day and come home early from work as it is the bank holiday weekend after all. Besides, I know if I’d stayed on I’d want to play with the system and then end up being home late again!

With the weather not being up to much, DDWT Junior had another go at finger painting today – with the following wonderfully colourful results. 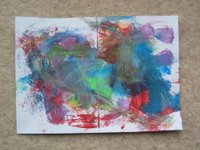 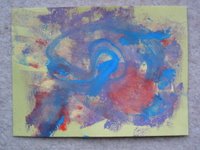 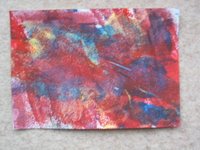