The DDWT family descended on Aberaeron today for the wedding of Nanny Jones to Ed. The service was held in Holy Trinity church in Aberaeron, which ironically is also where Mrs. DDWT and I got married (some 6 odd years ago).

We’d been a little uneasy wondering how DDWT Junior would be whilst sitting in the church for so long (45 mins plus) but in all fairness he was as good as gold. It was quite funny actually as during the service he spotted a spider walking along the floor – at which point he shouted out “Bider walking Mammy” – which gave everyone a chuckle. He was obviously blissfully unaware of what was going on as he later shouted “Birdy got two eyes” – referring to a gold eagle statue which was at the front of the church. He really is such a star.

The little gondola on the cake below is of significance because it is where Ed proposed to Nanny and becuase they had it specially sent over from Venice to put on the cake. 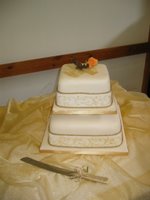 The evening reception for the family was in Cherubs restaurant, which is also in Aberaeron. The food was lovely – garlic mushrooms to start, followed by a rack of Welsh lamb, but the service was quite frankly, slower than a snail on a sedative. 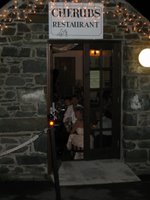 We got back to Swansea about 22:30 due to various hold-ups along the way. In fact, the journey up and back painfully reminded me why after 12 years of living in that neck of the woods it was one of the reasons I was so glad to move down here!