You are here: Home / Uncategorized / It's finally over

After 3 months of sporadic work in the garden, I’ve finally laid the new lawn and the garden regeneration project is now complete. When this all started back on May 25th little did I think I’d get to the hallowed turf – which is now our lawn – so quickly. 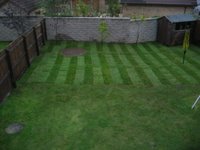 I was very very impressed with the quality of the turf and would recommend the company I used – onlineturf.com to others. Having ordered 77 rolls of turf, I was also pleased to see that my measurements were quite accurate, as I only had 3 rolls left at the end. It did take me about 5 hours to lay the 77 square metre lawn though, so it was another back breaking day. Who said I was on holiday?

Mrs. DDWT and I watched a film called ‘The 40 Year Old Virgin‘ last night – which was a comedy I hasten to add. Unlike most of the other alleged comedy films we’ve seen lately, this one was actually funny and you can guess from the title what the film is about. Not a classic by quite a way, but worth watching for some light hearted adult ‘ish entertainment.