Well as promised here is the lowdown of our midweek break in Center Parcs Longleat complete with a few snaps.

~ Monday ~
We arrived at Center Parcs around 12:20 having spent about 2 and a quarter hours getting there – with the customary holdups on the M4 around Newport. We were greeted with some warm September sunshine and pleasantly suprised how near our “Comfort Villa” was to both the Plaza and nearby lakeside (complete with mallards and moorhens – much to DDWT Junior’s delight). It didn’t take long before we were feeding the wildlife with some pre-packed bread which we’d taken along!! 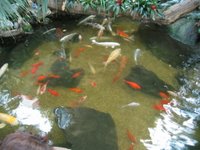 We spent the best part of the day inside the plaza and in particular the pool area – complete with various water slides, wave machine, hot tub and rapids. DDWT Junior loved every minute of it and I can see he’s going to be a real water baby (unlike me!). We also found time to have a bash at the garden size connect 4 game as well.

~ Tuesday ~
We decided to hire some bikes (very girly ones if you ask me) complete with child seat, which was great fun and presented a challenge for both Mrs DDWT and I. If you’ve ever tried riding a bike (particulary up a steep hill) with only one gear you’ll know what I mean – it certainly gave us a workout though and DDWT Junior certainly enjoyed (which was the main thing).

We also went for a long walk down to the Jarden de sports (sports village area) and home of the boating/fishing lake and mini-beach. This was where we decided it would be a laugh to hire a pedalo and go around the lake – this was great fun, but as DDWT Junior had to sit on Mrs. DDWT’s lap for the 30 minute ‘slot’ I had plenty of exercise keeping the pedalo moving! After all this excitement it was time to feed the carp which were more than happy to come right up to the shoreline for their share of the bread with the mallards. After seeing the size of the blighters, it was well tempting to go and hire a fishing rod. 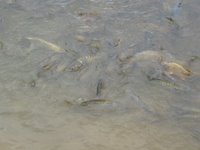 Whilst walking back to the villa, we spotted numerous rabbits who were quite content to come near to us – in search of more bread no doubt! We were also paid a visit (well our patio was) by a little squirrel. One of the treats of any stay at Center parcs is the number of visitors you encounter from the animal fraternity. 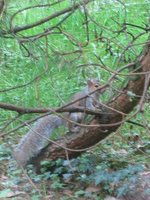 When we got back to the villa it was time to use the somewhat dodgy gas cooker, which seemed to pride itself in taking ages (and I mean ages) to cook anything – even a pizza (which normally requires 12 minutes, but was taking anything upto 3 times that long!). 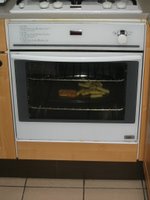 ~ Wednesday ~
We hit the swimming pool and water slides big time today and even Mrs. DDWT and I took it in turns to go down the rapids and slides (much to DDWT Juniors amusement). It also occurred to everyone bar me how much of a splash my large frame makes when hitting the water – even if you didn’t want to get a soaking, you had one! I also don’t the rather stupid thing of trying the ‘plunge pool’ – a mini-pool (about 2 metres in diameter) which is sub-zero in temperature. Never again, it was so cold my legs were tingling from my knees down! DDWT Junior also made history by wearing his swimming arm bands for the first time (without a tantrum!). Prior to today, he’d only ever worn a semi-floatable jacket. Progress indeed.

For lunch we went to the pancake house, which specialises in – yes you’ve guessed it – pancakes (of the sweet, sour and pretty much every variety you can think of). Mrs DDWT went for the Hawaiian and I went for the meat feast (and no they hadn’t nicked the names from Pizza Hut). We were both shocked to see that DDWT Junior actually enjoyed eating the salami on my pancake. It’s amazing sometimes what kids eat, especially when it’s not something that we’d eat very often. The moral of that story is to try them with everything.

In the afternoon we went for a bike ride – with DDWT Junior actually being on the bike (in a seat of course) with me for the 1st time (rather than Mrs. DDWT). It seems Wednesday was a day of firsts doesn’t it! We went and fed the ducks and fish (again) down by the Jarden de sports and also got acquainted with what can only be described as a very tame and moulting robin – who was perched no more than 2 feet away from us and happily twittered away for the time we stayed there. 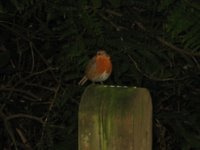 Treated Mrs. DDWT to a Magners in the evening (her 1st one) and we cracked open a bottle of ‘Caper Tree’, a South Eastern Australia white wine (which was instantly forgettable!). Still it was a nice way to round the evening off.

~ Thursday ~
The worst day of the week weather wise as it bucketed down all day. So we took the opportunity to do our gift shopping (at a few of the small shops within the Plaza) and DDWT Junior bought himself a pressie with the money his Nana had given to him prior to us leaving. After much deliberation, he finally opted for ‘Henry’ (as named by us) the horse. 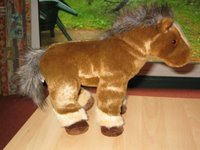 Given that this was our last night at Center Parcs (and that the rain had cleared come early evening) we decided that it would be a nice idea to swim outside in the large pools and rapids – whilst it was dark for DDWT Junior to have a different ‘experience’. It was a lovely setting with the stars in the sky, bright water lights and blue fairy light decorations in the trees. DDWT Junior was full of ‘oows’ and ‘ahhs’. After all the excitement he was obviously feeling rather adventurous and opted to go on several of the other ‘grown up’ water slides and tunnels – much to our amazement.

I also bought the ‘Times
‘ newspaper for a change – something which believe it or not I’d never done before. I was pleasantly suprised as to it’s readability and non-pompous content – something which I often thought as compulsory for Tory backing papers (Oooow, controversial statement or what!).

Even though the weather was lousy, I decided to take my girly Dawes bike for a long (35 minute odd) ride around the complex – God how I missed my own bike and going for a proper ride!

~ Friday ~
As it was our last day and had to be out of the villa by 10am (we actually left at 11:15am!), we were going to try and make the most of everything on our last day.

So we went out bike riding, hit the swimming pool and slides (for the umpteenth time) and visited the beach down by the Jarden de sports. It was whilst we were at the beach that we heard DDWT Junior’s quote of the week, when upon descending the slide (which was rather wet after overnight dew) he proclaimed that “my bum is wet” – well, we were in stitches, much to his bemusement! Our final meal before leaving was at the swimmming pool lagoon bar in the Plaza – which complete with the warm indoor climate and palm trees was the perfect way to round off our visit.

We finally left Center Parcs at around 3pm and headed for Cribbs Causeway shopping centre near Bristol. Eventually got home around 9pm totally holidayed out – but having had a super time. We’re already looking forward to next year and are contemplating taking advantage of the 25% off offer for booking early!

Right, back to the present time. After my lawn laying antics of a few weeks back, it was time for it to be mowed for the first time today – so I duly obliged and was well pleased and impressed with the results. The cut and knitting of the turf was better than I could have hoped and it was with great relief that the number of divots was minimal. It’ll be a great play area come next spring/summer for our little fella!

Having neglected my body somewhat over the past fortnight (in terms of training) I thought it was about time to get my arse in gear and do something. So I opted for a complete change from biking and did some weight training instead. I thoroughly enjoyed it and must confess that the break from exercise had done me some good.