Phew what a hectic 24 hours has just passed by. Since leaving Swansea at noon yesterday, we’ve driven to Bristol, flown to Belfast, gone to a gala dinner awards ceremony, slept (very little), flown back to Bristol and arrived back in Swansea at 14:50. Talk about a whistle stop tour!

There is so much to tell about the trip that I really don’t know where to start. I think I’ll start at Bristol airport where we had to keep ourselves busy after finding out that our Flybe flight was delayed by an hour or so. Ok, first up… I got stopped at security and had my Lynx Click deodorant confiscated by the rather aged female security guard (your typical ‘saga lout’ type) – basically because it could have contained some bomb making mixture. Whilst I wasn’t amused at the time, I was grateful that at least they do carry out such checks these days. Either way, I certainly wasn’t having the ‘Lynx effect‘ on the security guard!

After this minor setup, it was time for the gang to try and teach me shorthand in 30 minutes – needless to say I didn’t get as far as writing ‘apple’ let alone anything resembling a sentence. Now this could be attributed to the fact that I was by now drinking some strongbow (served by an entirely Polish speaking bar team I hasten to add) or my tutors were having a laugh – at my expense.

Time soon passed and we were on our way to Belfast. The talk of the 1 hour and 15 minute flight was (a) why was the plane rattling so much and (b) the sub-standard “trolley-dolly” on offer (although the fella’s agreed to disagree on the latter). Anyway, we arrived in Belfast and we promptly driven to the Travelodge (you can’t beat staying in style can you LOL) by Mick – well I think his name was Michael, but we’d decided to call all the fella’s from Belfast Mick to make it easier. No offence intended to any Michael’s or Mick’s reading this and no I’m not taking the Michael either.

A quick shower, shave and toilet visit and we were back down in reception by 6:45 ready for partytime at 7pm in Belfast City Hall. What a night ensued – plenty of wine, food (especially the fillet steak – which incidently was the BEST I have EVER eaten, well what I can remember eating anyway) and song/dance. The helium filled balloons are also worth a mention, if only for the number of Welsh speaking Mickey Mouses we met on our table (i.e. us lot!). Despite not winning any awards (which was very disappointing) we certainly made our presence felt and showed everyone how to party (and embaress yourself at the same time).

With shutdown coming at 1am in the morning, it was time to venture to a nightclub in search of more tunes to bop along to. Everyone recommended either Thomsons (sp?) or Milk, we didn’t care which one we hit until one of the security guards on duty politely (but firmly) recommended that we didn’t venture to either. We heeded his advice and opted to go back to the Europa hotel – which was where most of the people at the dinner were staying.

Whilst in the hotel we hooked up with an Irish TV crew who were doing a film based on the Gaelic language and in particular Galway Gaelic. A very interesting conversation ensued around the Welsh and Gaelic languages and their similarities. We also touched on the somewhat more thorny issue of the Catholics and Protestants in Northern Ireland – which was very enlightening, especially hearing it from the horses mouth as it were (rather than the media portrayal of life in Northern Ireland).

Anyway, we finally left the hotel around 6:30am (having learned a great deal and drank lots of vodka and cranberry juice!), went back to the Travelodge for a few hours kip before having breakfast at around 9am. Mick picked us up a wee bit later and before we knew it we were back in the departure lounge ready to fly home. I took this opportunity to get a few small gifts for DDWT Junior – a rather large pencil (complete with a sheep chewing on a clover) and a little leprechaun – now christened ‘Mick’ you’ll be surprised to hear. 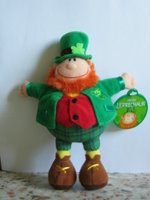 We were soon on the plane – a more sturdy one this time around – and back in Bristol by 1pm. The team were totally tired out (or hungover as was the case with some) and ready for some serious sleeping! We duly arrived back in Swansea around 2:50pm feeling very weary but having enjoyed a good ‘crack’ (as they say in Belfast).

The Swans were playing the Terriers of Huddersfield today and I was mightily relieved to have given my Dad my ticket for the game as I didn’t think I’d be back in time. It would have been a close shave and the way I feel I’m glad I did.

I feel even more justified now as they lost 2-1 and played the worst they have all season!