The Swans entertained the Railwaymen of Crewe at the Liberty tonight and I made certain that I wasn’t going to miss this game – especially as it was being billed as a ‘make or break’ game for Kenny Jackett.

I obviously can’t comment on Saturday as I wasn’t there, but tonights performance was a lot lot better and perhaps more importantly saw the Swans return to playing football not hoofball as they have been of late.

Some 5 changes were made – perhaps the biggest one being Willy Gueret being dropped in favour of Andy Oakes, but for most of us fans this was long overdue anyway. The Swans controlled the game from the start and really should have won by more than the 2-1 scoreline suggested. Goals from the recalled Rory Fallon and Leon Knight, either side of the Crewe penalty were enough to see the Swans home – much to the relief of the 10,031 present.

My man of the match was Darren Way, whom having had a torrid start to his Swans career certainly showed he has a lot to offer with a gutsy and energetic marauding display in the midfield engine room. Little Leon Britton was also a handful. For the first time in quite a few games, I left the stadium a happy bunny and it certainly helped raise my spirits. You can read a full match report on the Swans official website.

As Tuesday’s are not mother & toddler group day for DDWT Junior, he spent the best part of the morning painting and generally making a mess as only 2 and a half year olds can do. 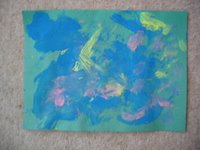 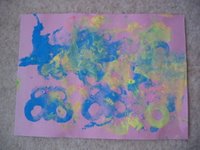 I’m sure he won’t thank me in years to come for sharing his artisitc efforts with you! Having said that, you never know he might become a well known artist.