For the first time ever, DDWT Junior actually helped Mrs DDWT make some ‘Dora the Explorer’ cakes today. Even more remarkably, he did so without making a major mess on either himself or the kitchen – quite a feat for someone who’s only 32 months old (2 years 8 months). 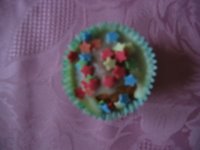 I have to say they tasted great as well – especially when swilt down with a cup of Kenco coffee.

I also made a lame attempt to make a couple of paper rockets for DDWT Junior after tea – he thought they were great, but in all honesty I don’t think anyone on Blue Peter would have said “Here’s one we made earlier”.

Despite feeling as though I’m set for a cold, I went out for a ride on my bike lunchtime (12 miles) to get back into the saddle as soon as I could after Sunday. It was really enjoyable and I’m glad to say I didn’t have any long lasting after effects from my efforts on the weekend.

It was also great to see the official BikeWales West Silver race results from Sunday today as well, with me actually finishing in 31st position (out of a field of 76) in a time of 4 hrs 15 minutes and 41 seconds! Not bad for someone who hasn’t been cycling for a year yet and on a mountain bike.

A father of two and husband to one. Loves to cycle and run badly. Wannabe writer and photographer. Lifelong Swansea City and Wales football fan. Always look forward and never look back.