After spending the best part of the morning mowing our somewhat jungle-esque lawn – with the rain having put paid to any of my previous attempts of late to cut it – I was back in the house just in time to watch the Wales v Slovakia football game. I wish I hadn’t bothered (watching the football that is).

So in order to raise our spirits after the 5-1 humiliation, we headed off down to Swansea Bay for a walk along the beach. Despite the blusterly conditions it was a refreshing walk – interspursed with a visit to the children’s play area by County Hall. In fact the play area was a really good indicator of the strength of the wind, in light of the amount of sand that had made the swing look more like a sleigh ride! 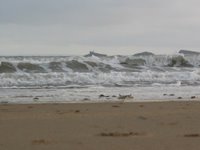 We also came across the Jesus Army bus which was also parked in the car park of County Hall. I must confess to having never even having heard of this ‘group’ of people. But that could be due to the fact that I’m not an overly religious person. 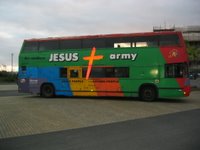 Next stop was Borders in Fforestfach for a peek at the latest books on offer and for some Christmas shopping ideas for DDWT Junior and the rest of the family. It was here I came across a book called ‘Shoot the Puppy‘ – which drew my attention due to it’s cover, i.e a cartoon of a man holding a gun down a puppy’s throat. Not pleasant you might think, until you realise that the book is actually about today’s world of office speak!

Further investigation when I got home (from Amazon.co.uk) revealed more about the book and I am now seriously considering adding it to my Christmas wishlist. There is a quite a funny review of the book on the Telegraph website as well.