You are here: Home / Family / Potty – in more ways than one

It’s been a potty few days in the house of DDWT in more ways than one. For some bizarre reason I forgot to blog yesterday, which wouldn’t have normally been such an issue – but for the significant events that took place.

DDWT Junior actually used a potty for the very first time! Other parents will know the significance of this event, whilst the rest of you will wonder what the hell I’m on about. All previous attempts had ended in either tears or tantrums (or both) and even – yes I know it’s sad – my attempts at er, urm, showing DDWT Junior how it was done proved fruitless. So now that he’s tried it once, we’re hoping it’s the start of many more potty visits. 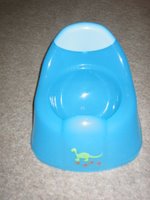 Perhaps even more potty however was my lunchtime bike ride (down to Forte’s again – 11 mile roundtrip) in what can only be described as wild weather. The driving wind and rain made it extremely difficult to control the bike, let along pedal. In retrospect I was a bit daft to even consider going out in those conditions. People think I’m obsessed at the moment with training, well it isn’t that I’m obsessed, I’m merely very focussed on what I want to achieve – competing in duathlons in 2007.

In complete contrast to yesterday’s monsoon conditions was the gloriously sunny and mild conditions that faced me on my 3 mile run today (23 minutes 18 seconds). I found it tough going especially as I am training on my own at the moment – due to my training partner being unwell.

Mrs. DDWT would kill me as well if I didn’t give our 10 year ‘going out together’ anniversary a mention which was also yesterday. I can’t believe how quickly the time has gone, albeit very nice – I have to say that *wink*

Oh well it just goes to show, the older you get, the less time you have on your hands – FACT.