Personal disappointment at the CIPR Awards last night for myself unfortunately as my little ‘project’ failed to win an award, but alas at least my butties in the PR team won the ‘Gold’ award ‘Newsletter, Newspaper or Magazine’ category. Nice one guys!

Cardiff’s Marriott hotel was the venue for the awards and it must be said that it wasn’t nearly half as good as the Belfast City Hall effort. The company wasn’t great either with the world of public relations and journalists vying for prominence over each other and the tension being almost tangeable. Funny though if neither is “your bag”. I also came to the conclusion that if you’re relatively tall, leggy and blonde (and female preferably) that you stand a damn good chance of making it in the world of PR. But hey what the hell do I know, I’m a web developer.

To add insult to an already bruised ego, the £11.20 car parking charge (for all 4 hours 45 minutes odd) made me want to vent my spleen once again – but this time in the direction of Cardiff City Council. I shall never ever complain again about the cost of car parking in Swansea.

Nowt much else to report really thus far today really – a disadvantage of blogging during the lunch hour really, as opposed to being out training and blogging later as is the norm on non-flu infested days.

I thought I’d share the remaining bits of my lunchbox (oo-er) with you though, in the form of a fruit sculpture – which office colleagues tell me looks like a lady with a walking stick!?!?! I’ll let you make your own minds up about that though. 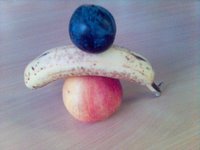