Our Candy CD950 dishwasher gave up on us the other day, in a rather load bang, smokey, trip switch, no electric in the house kind of way. Today I finally had the opportunity to take a closer look at what went wrong.

Upon removing ‘Candy’ as I shall affectionatley call her now, I found the blast remains of where the obvious bang had originated. I promptly gave ‘Candy’ a lift up and I could immediately see the somewhat black, sooty and splintered mains suppressor which had obviously given up the ghost. 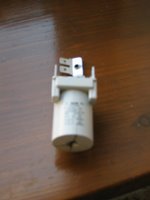 Once I’d removed the suppressor, I began to contemplate how on earth was I going to get a replacement part. However, much to my surprise a quick search on google for a Candy CD950 and spare parts, prompted me to visit eSpares Ltd and hey presto there was a suppressor for the sum of £9.48 including delivery. I was most impressed and pleased. I’ll give you an update on the repairs as soon as I get the part.

It was turning out to be a very DIY orientated day as I also managed to arrange with a local builder to come and collect ALL of the spare wood we had stored in the shed – which resembled more of a bonfire stack than a shed. It helped us both, as I now had my shed back and he had some spare wood for his log burner!

Completing the hat-trick of DIY jobs was the removal of DDWT Junior’s stair gate from his bedroom doorway – as in all honesty it has now served its purpose, and especially as there is one at the top of the stairs now anyway (which wasn’t there before!).

So all in all it’s been a good day and apart from the wood removal, a great day to stay indoors. The weather has really taken on a winter feel and there were numerous heavy hailstorms today – which made the road and garden white on one occasion. Oh how I look forward to winter the a deluge of the proper white stuff. I still live in hope of having a white Christmas *sigh*