Norwich City away was the longest trip the Swans would face in the League this year and so it was an obvious choice on our shortlist of ‘away’ trips to be undertaken. Here is a rundown of our little trip!

The Deeters Bar Jacks (note the new spelling in order to avoid confusion for Chris whom thought it was Dieters as in weight loss, rather than a German forename!) set off in bang bus number six at 7:15am with a daunting 616 mile round trip to Carrow Road ahead of us.

We had the pleasure of welcoming TJ to the Deeters ‘family’ although some of the lads insisted on calling him Conkers – in reference to his north Walian wine making roots as opposed to his genitalia. Anyway, his additional vocal presence was most welcome.

We made good time and before we knew it were in Reading services having an M&S stop. We were roughly half way there! Without wanting to waste valuable eating time, we left sharpish with Lance at the helm and it was full steam ahead for our pre-match lunch stop – The Gamekeeper in Old Buckenham which was some 15 miles or so from Norwich.

After a few minor navigational problems we reached our main grub stop around noon and were impressed by what we saw when we arrived. Good choice Lance! Trudging in through some bemused locals we studied the menu and ordered our liquid refreshment. We were not disappointed on either front!! I went for the Rabbit and Venison stew in dumplings, served with mash and roast courgettes, swilt down with some fine Aspall Organic Suffolk Cyder – WOW it certainly hit the spot. Don’t ask me what the others had, I was too busy satisfying my palette on one of – if not the – best away day meals I’ve had to date. 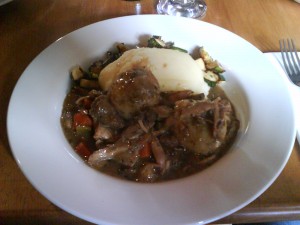 1:30 pm duly arrived and it was time to head off in search of Carrow Road and some parking. It was a bit touch and go for a while and a very long walk meant that we finally got to the ground with 10 minutes to spare! 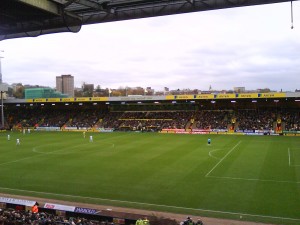 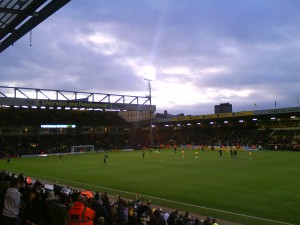 I won’t say much the game itself as you can read numerous match reports on both the official Swans and Norwich websites.

It goes without saying that we were well happy with the result and it made the long journey home a happy one, which had we lost I think would have – well need I say more!

Talking of the journey home, you’ll never guess who we saw driving (with his son) – yes, the hamster himself Mr. Kenny Jackett!!  We did try our best to get his attention – but he never flinched,  keeping his eyes on the road and Mercedes in one piece with it. Miserable git 😉

Not being one to start rumours or anything, but he was heading in the direction of Watford on the M25 circular – going home after the ‘Wall game maybe or perhaps off to see the Watford chairman about a new job.  Remember where you read it first 😉

Anyway, farewell until the next Deeters Bar Jacks away trip…..

A father of two and husband to one. Loves to cycle and run badly. Wannabe writer and photographer. Lifelong Swansea City and Wales football fan. Always look forward and never look back.