You are here: Home / Sport / Swans on the Road – Premier League Distance Chart 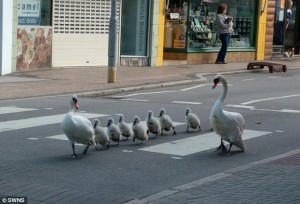 Despite still not being able to quite believe that super Swansea City are now a premier league football team, I thought I’d channel my excitement into doing some research.

With ambitions of one day becoming a member of the illustrious ’92 club’, I couldn’t think of a better way to spend some rare spare time than by calculating how far and how long it would take to get to every premier league ground next season!

Now before I divulge all this information, it’s worth mentioning that…

No doubt IF you chose to take the scenic route through mid Wales (for the northern games!) then the distance would drop on average by around 20-30 miles BUT the travelling time would be the same or a little more. Your call 🙂

To save you totting it all up, if you plan on going to ALL 19 Swans away games in the premier league next season, you’ll clock up in excess of 8,600 miles!!

For me there are a few games there of particular interest – due to not having visited the grounds before – so I suspect it could be an expensive few months between August 2011 and May 2012. However, there is a slightly bigger problem than the cost.

Now that the Swans have over 16,000 season ticket holders, I suspect there is going to be the slight issue of getting hold of away tickets – especially as allocations (I suspect) will vary from around 2,500 (Wolves, West Brom, etc) up to around 9,000 on rare occasions (Man Utd, Arsenal, Chelsea, etc).

7. Unless otherwise agreed by the Board or between the Clubs, each Home Club shall make available to its Visiting Club:

7.1 3,000 tickets or, if the capacity of the Home Club’s ground is less than 30,000, such number of tickets as is equal to 10 per cent. of its ground capacity; and, whether or not that allocation is taken up,

7.2 tickets for a minimum of 10 per cent. of the Home Club’s disabled spectator accommodation.

So Mr. Jenkins, if you’re reading this (or if someone from the club is), do you think it’s time to have a season ticket for away games?

P.s – if the club do decide to take up this splendid idea, do I get a free ‘away’ season ticket for having the brainwave in the first place?